They Promised Effective, Responsive, and Transparent Government and This Is What They Gave Us 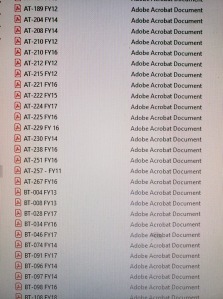 It’s a strange world we live in.

We made two Public Record Requests (PRR).  The object of the first one was to get information from the City of Modesto regarding how the City Attorney obfuscates the amounts Modesto pays for legal fees in general,  including those we have to pay to his firm, Meyers Nave. City Attorney Adam Lindgren had his para legal respond (see accompanying picture) by scrambling their response.  Adam took exception to my characterizing his response as ‘scrambled’ at the 8/13/19 Council meeting. We can only presume he prefers the term ‘randomizing.’

Each of these entries is him cannibalizing parts of budgets of other departments  to use for legal expenses. In other words he gets to spend other departments’ money for his legal costs without it being reflected against his office. He likes to say this has been an ongoing practice but this basically was initiated  soon after his firm took over as City Attorney.   So lets review…stealing from other department’s budgets for legal fees is a “past practice” that he started when he and his firm took over being City Attorney in 2013. He justifies it by simply calling it past practice.

Another interesting observation is that his department received the files in chronological order but as you can tell he made analyzing the costs more difficult by his, and we’ll use the term Adam apparently prefers here, ‘randomizing’ their response.  This picture is shown as an example of the technique he employed and not the information inside the files themselves.

His response to the he second PRR is more of his modus operandi (read method or technique). It was a simple request designed to discover when he knew Monica Houston brought the problem of purchasing property around Rt. 132 to light and when he recused himself from the discussion like an ethical attorney would.

Sent: Tuesday, July 16, 2019 4:10 PM
To: Stephanie Lopez; Dana Sanchez
Subject: Public Record Request
Ms. Lopez,
I would like all emails sent and received by Monica Houston during her time as Modesto’s City Auditor in chronological order (starting with the first through to the last). I would also like any schedule or meeting calendar of hers that might still be on your servers.
Thank you,
Emerson Drake
A straight forward, no guile,  just a simple request for information the public is entitled to by law.  His response should be seen to be appreciated.  In order to read the files you first have to download them.  The file itself is from Modesto City servers and is ‘untouched’ by human hands.  In other words the city is completely responsible for the contents and they can’t been altered by anyone else.
https://cityofmodesto.box.com/s/h4vf2kej05oty0wy4r64ef6pj4xrov1g   Their response of 2,470 pages has not one email that Ms. Houston generated.  The responses provided were agendas and conference invitations. This is what the City refers to as a rolling release and we can expect more releases in the future.
So that the Council members can’t deny they have either seen or ignored this response, I asked Kathy Espinsoza from the City of Modesto to forward the email response I received so the Council members wouldn’t have an excuse not to open the file.  The Gang of Four (Bill Zoslocki, Mani Grewal, Doug Ridenour, Jenny Kenoyer) controls the city right now.  Maybe they’ll approve of the response from the City Attorney and if they do, they’ll allow the cover-up to continue.  After all, he’s not only covering up for himself, he’s covering up for them, too.   We’ll find out Tuesday 9/3 at the city council meeting.
The following is the entire series of emails pertaining to the PRR. The latest is at the top and the original is at the bottom.  Read them and decide for yourselves if Adam Lindgren is being responsive to a citizen’s legal request or if he’s doing his best to delay things to keep himself and his cohorts out of trouble.

Dear Mr. Drake,
This email is in response to your written request for public records received by the City on July 16, 2019.  We are treating your request as a request for public records in accordance with California Government Code Section 6250 and following (the California Public Records Act, or “the Act”).  The Act requires that public agencies make reasonably identified, non-exempt public records available for inspection or provide copies upon payment of the direct costs of duplication.
The City is required to notify you within ten (10) days whether the requested records will be disclosed.  (Gov. Code section 6253 (c)).  On July 26, 2019, the City notified you that we would need an additional 14 days to respond pursuant to Government Code section 6253(c). This response fulfills the City’s obligations under the Act.  Responsive, non-exempt public records have been recovered.  The City anticipates it will complete its review of these documents within the next few weeks, and will disclose these records to you in batches in a rolling release.
When the City makes the responsive records available to you, it will redact all information determined to be privileged or exempt from disclosure under the CPRA or other applicable law. These redactions will include, but not be limited to: (i) Government Code section 6254(c) (incorporating privacy exemptions found in the United States Constitution and Article 1, section 1 of the California Constitution), which exempts certain private information from disclosure where the release of such records would constitute an unwarranted invasion of personal privacy; (ii) Government code section 6254(a), which allows for “preliminary drafts, notes, or interagency or intra-agency memoranda that are not retained…in the ordinary course of business” to be withheld when the public interest in withholding the records clearly outweighs the public interest in disclosure; (iii) Government Code Section 6255 “deliberative process privilege,” implied by California courts from the “public interest exception.” Under this exemption, records containing information which could expose the public agency’s decision making process in such a way as to discourage candid discussion within the agency and undermine its ability to perform its functions are exempt from disclosure; (iv) provisions of the Evidence Code related to privilege.”  (Gov. Code § 6254(k).)  This provision incorporates records subject to Evidence Code section 954, which exempts lawyer-client communications from disclosure.  Government Code section 6254(k) also incorporates records subject to Code of Civil Procedure sections 2018.010 through 2018.030, which exempt attorney work product from disclosure. Records responsive to your request are being withheld according to these exemptions. Additionally, records responsive to your request are being withheld according to Government Code section 6254(b), which exempts from disclosure records pertaining to pending litigation or to claims made under the Government Claims Act until the pending litigation or claim has been finally adjudicated or settled; (v) Government Code section 6255 or “catch-all exemption”, which exempts records from disclosure where the public interest in nondisclosure clearly outweighs the public interest in disclosure.
Below is the link to the first batch of your rolling release.  You will need to download the documents before you can view them.  Please note, this link will expire in 30 days.
https://cityofmodesto.box.com/s/h4vf2kej05oty0wy4r64ef6pj4xrov1g
If you have any questions about this matter, please contact me at dasanchez@modestogov.com, or by phone at (209) 577-5487.
Sincerely,
Dana Sanchez
Administrative Office Assistant III (Confidential)
City Clerk’s Office
1010 10th Street.  Suite 6600
Modesto, CA.  95354
(209) 577-5487
dasanchez@modestogov.com

Ref: 3194
From: westernpalms@aol.com [mailto:westernpalms@aol.com]
Sent: Tuesday, July 16, 2019 4:10 PM
To: Stephanie Lopez; Dana Sanchez
Subject: Public Record Request
Ms. Lopez,
I would like all emails sent and received by Monica Houston during her time as Modesto’s City Auditor in chronological order (starting with the first through to the last). I would also like any schedule or meeting calendar of hers that might still be on your servers.
Thank you,
Emerson Drake
Posted in Uncategorized and tagged Adam Lindgren, Bill Zoslocki, Doug Ridenour, Jenny Kenoyer, Mani Grewal, meyers nave, Modesto City Council, Modesto politics | Leave a comment