By Katherine Borges and Valerie Goldstein 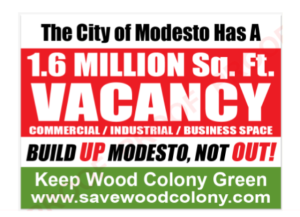 Reality is the state of things as they actually exist and not as they may appear or are imagined.

The first item addressed by Marsh is the “return” of the Beckwith Triangle from the general plan. The area was slated to become a ballpark along with commercial and industrial development, which Marsh now describes as an “unsound plan.” The Beckwith Triangle is still a part of Modesto’s new plan update, just with a different zoning mix. But more importantly, how can something be “returned” when it was never yours to begin with?

His next paragraph is an acknowledgment of just how much the Modesto Chamber of Commerce controls the council. Despite the massive and well documented public outcry against including Wood Colony in the general plan, the council conceded to a compromise with the chamber of “around 1,000 acres.” Marsh even refers to it as a “pristine agricultural treasure,” but zones it for both commercial and business park with a gerrymandered notch on Beckwith to try to prevent residents from voting down the annexation.

Marsh’s third point of ag mitigation is nothing more than a damage-control diversion for Jenny Kenoyer’s political gaffes. Stanislaus County already has an ag mitigation policy in place, yet Modesto’s has not yet been approved; which Marsh alludes to with, “If completed … ”

In his fourth attempted rationalization, Marsh cites “1,500 acres of land that was targeted for housing back to ag and out of the General Plan.” To remove LAFCO-approved land in exchange for land that LAFCO previously voted against being urbanized is not commendable but is, in reality, irresponsible planning. (LAFCO is the county commission which approves/denies land annexations.)

Most wouldn’t even know that Salida was included based on Marsh’s skillfully crafted wordsmithing. The land around Gregori High is part of the Salida Community Plan, an initiative passed by the Board of Supervisors for Salida in 2007. To put it another way, Marsh is saying, “ … the best and quickest way for Modesto to attract more jobs without taking any land that retained its agricultural zoning” is to steal it from Salida. The land currently around Gregori is zoned ag and the council has repeatedly admitted the jobs produced are 25-40 years out.

The last Trojan Horse that Marsh trots out is the Residential Urban Limits (RUL), which if approved by voters, would send to ballot any time a residential developer wants to build on farmland. As if the people of Wood Colony are going to respond, “It’s OK for you to bulldoze my house as long as you don’t build another house in its place.”

Like the aforementioned ag mitigation, Stanislaus County already has a rural urban limit in place, Measure E (co-authored by Denny Jackman and … wait for it … Garrad Marsh) passed by voters in 2007. Yet for Wood Colony and Salida, RULs will not apply since neither land-jacking by Modesto involves residential development plans.

Modesto neighbors, please help us! With Salida and Wood Colony united to protect our homes, our farms and our communities, every member of your City Council cast a vote against us. They aren’t listening to us and they aren’t listening to you. We cannot recall them, but you can. Join your district’s recall effort and help take your city back from the money interests. We just want to live our lives in peace without the threat of losing our homes and communities.

By Katherine Borges and Valerie Goldstein