Listening to a Turlock Mayoral forum and Amy Bublak making allegations that Gary Soieseth had started a consulting firm and intended to do business with the potential Turlock water treatment plant, set us on an interesting journey.  Trying to get to the bottom of charges that Gary was intending on doing business with a plant that was still on the drawing board is an uphill battle to say the least, but we did file a (PRR) Public Record Request on October 24th to discover any MID connections to Gary’s new company. We later learned the company’s name in a Bee article,it’s called Central California Advisors.

According to documents obtained Gary’s contract negotiations had advanced to the closing stage back in July.  Only his potential contract was with The Gaulco Group as Senior Adviser and not his own company.  As you can see on the first page Gary was expected to start on 10/01/18.  Yet he told the Bee he had already done some work for MID on the Federal licensing of the hydro-electric generator at Dom Pedro Dam.  Strange since the federal lobbying/advisers are another company and that company doesn’t show up in the PRR. 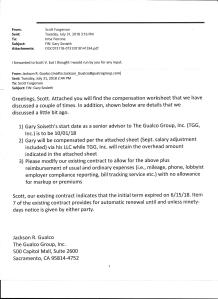 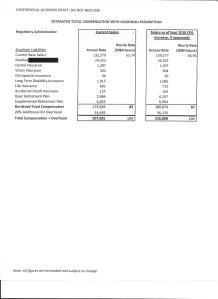 And now is where it gets interesting.  It the Bee article General Manager Scott Furgerson says “Soiseth had done minimal work on behalf of the MID in his new role.” Yet there is no contract with Gary’s new company or any mention of Gary being added to the Gualco Group and no money trail to date.  MID Public Affairs Spokesperson Melissa Williams spoke with us and verified Gary Soiseth had indeed done some work for MID but is being paid by Gualco, not MID, but she did not have any information regarding the amount of work or money involved.  She also stressed that Gaulco was paying Gary and not MID.  Yet, despite her assertions, if Gualco is using Gary to work for MID then MID meaning WE are footing the bill.

For those who don’t remember Martino Graphics, Tom VanGroningen, and MID’s attempted water sale, let me provide a little background.  During the time leading up to the water sale MID kept saying they didn’t have contracts with individuals to support their attempts at selling our water to San Francisco.  They kept denying knowing to whom the money was going even after multiple PRR’s were filed.  Finally they admitted that they had a contract with Martino Graphics for over $234,000 and Martino Graphics had contracts with a variety of local politicos, some of whom came to MID to publicly support the sale.   And now we have MID first denying any contract with Turlock’s Mayor and former MID employee Gary Soiseth, either with his company Central California Advisors or Gualco Group, and yet MID is paying Soiseth through Gualco Group.

Remember Nick and Larry fought the underhanded Allen Short and Tom VanGroningen for our water their first year on the Board.  It’s no wonder Directors Nick Blom and Larry Byrd called for an investigation.  First Gary gives his notice and then he changes his mind and delays his departure date. Was it to ensure he gets vested for his five years of service or to give  MID’s General Manager Scott Furgerson time to negotiate his severance package, ie: his new job?  And why is his former boss feathering his future nest?  And now the kicker…employing Gary through Gualco will cost MID an extra $36,135 per year if he gets his raise.  But since it became public his first “special” arrangement goes away but a second one, almost a secret one, delivers the goods.

The only way we can see General Manager Scott Furgerson originally supporting  this or pushing forward with this semi-clandestine arrangement is if MID Directors John Mensinger, Paul Campbell, and Stu Gilman are on board.  Which opens the door to another question…what other secrets or surprises are we in store for?