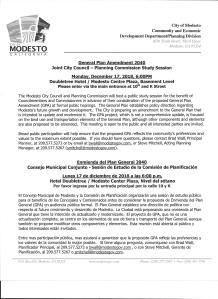 Modesto is planning a public study session for Councilmembers and Commissioners, and is allowing the public to attend.  In a recent public records request, the city denied that Councilmembers had had any input into the General Plan Amendment. Unsurprisingly,  the City Attorney Adam Lindgren’s response was a point blank denial that ANYONE from the Council had sent any emails or texts to city staff regarding the GPA.  Do we believe that?  No!

I would suggest anyone interested in learning the city’s plans should try to attend or at least send a representative to be in the loop. The date is Monday, December 17, 2018, 6:PM Modesto Centre Plaza basement level.  The main entrance at 10th and K Street is recommended.