MID’s Crossroads, Transparency or Cover-up, PRR’s and Lawsuits – How Much and Who is Paying?

Which road will The Modesto Irrigation District  travel, the straight and narrow road of sunlight and transparency or the one full of twists and turns trying to stay in the dark shadows of duplicity?  MID’s latest outside council is a firm chosen by MID’s General Manager Scott Furgerson called Atkinson, Anderson, Loya, Rudd & Romo to respond to PRR’s and to attend meetings to provide legal counsel and to respond to Public Record Requests (PRR).

On February 7th we requested the cost for responding to a PRR in order to compare the costs between in house and outside counsel. It was refused.  They claimed that asking for documentation regarding legal matters, in this case their bills, falls under attorney client privilege (their entire response is included in the insert.  Claiming an invoice to a public agency is covered under ‘privileged’  is a new on us. 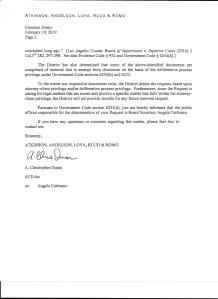 After you read their response you have to ask yourself what are they hiding.  And you have to know we haven’t given up getting to the bottom line cost.

Accountability: Another looming crossroad is who is going to pay for the legal defense for Director Mensinger and GM Furgerson in the hostile workplace/harassment lawsuit and will there be consequences if they lose or if hush money is paid.  Should ratepayers be forced to pay for the legal defense?   The suit alleges John Mensinger created a hostile work environment, which employers are required by law to prevent, and the GM stood by using the ‘he’s my boss what can I do’ defense for his alleged inaction.

Should elected officials be held accountable?  Recently in Turlock Gary Soiseth lost his bid for reelection and many claim his micro managing and his creating a hostile work environment were contributing factors. This same player was given the opportunity to resign rather than to be fired for his job at MID.  Maybe Mensinger and Furgerson admired Soiseth’s management style and took it as their own.  His antics didn’t upset them since even though they had been paying him for months when he didn’t show up for work, they used his services through another company waving their new catch phrase ‘for the good of the district’.  We have to ask do they even know what that means?

2 thoughts on “MID’s Crossroads, Transparency or Cover-up, PRR’s and Lawsuits – How Much and Who is Paying?”