Archive for the tag “Pathway to SPRAWL”

My name is Katherine Borges and I serve on the Salida Municipal Advisory Council also known as the Salida MAC.

For those of you recently elected to the council and who may not know, Salida residents have been vocalizing their opposition to annexation to Modesto over the course of the last year and a half at both public meetings and in the media. At our February Salida MAC meeting, the MAC council voted unanimously against being annexed by Modesto. This vote represents the majority opinion of Salida residents and that is what the MAC council is elected to do just as you are, represent the people.

At the August General Plan Update meeting, Brent Sinclair and his planners announced that they had removed Salida from the Plan. However, Mayor Marsh is quoted in the Bee on August 20th as saying that it was “premature to do that”. On September 16th, the Modesto Planning Commission voted to submit the plan to you as is without Salida.

In the Modesto Bee, Mayor Marsh suggested that tonight’s vote on the General Plan Update be postponed until January so the new council members can get caught up to speed. As far as Salida goes, there’s really not much for you to get caught up on there because Kevin Valine of the Bee nailed it when he called it, “vehement opposition”.

And now its your turn to listen to the people of Salida, to not vote to add Salida back in and furthermore, we respectfully request that you additionally remove the land south of Kiernan, east of Stoddard and west of Dale that is part of the Salida Community Plan. The county has designated this land for Salida’s future and the Stanislaus County Supervisors support us in this.

Its time for Modesto to work with Salida and not against us. You also need to stop your water extortion. For anyone who may be unaware about this, the City of Modesto has a ‘will not serve’ in place for new development in Salida. In other words they refuse to serve new water customers unless Modesto gets to annex the land. This was the case with Modesto’s land annexations for the parcels that Costco and Kaiser are on. Salida not only lost the retail tax base of Costco, but our Salida Fire District lost the property tax from that land as well which was a factor in forcing them to merge with Modesto. And something key that you are missing here with this extortion is that by inhibiting growth in Salida, you are inhibiting new jobs for Modestoans.

Please consider extending an olive branch to Salida in the effort to makes amends and keep Salida out of the General Plan Update and remove the land south of Kiernan as well. Another olive branch to consider is selling our Del Este system back to Salida. We want it and you don’t so let’s do this! Allow Salida to become City of Modesto water customer for new development. There is already pipe being laid as I speak under the Kiernan overpass to bring water from Modesto to Salida. 2014 is almost upon us and this would be a great way to start the new year working together.

Despite the nice turnout of over 120 people the night had an ugly start when one of the Modesto Chamber of Commerce’s representatives, Craig Lewis, started making negative comments to a few of the people as they walked through the door.  (No, they weren’t directed at me)!  I believe he prefers to denigrate women as we heard several times as the night progressed.  I guess its the way he was raised, believing women belong at home, pregnant and if they want to have an opinion they should ask their husband for theirs, (heaven forbid they form an intelligent one of their own).

Unfortunately professionalism went right out of the window and the presentation continued going down hill from there.  Land use attorney, George Petrulakis, felt the need to call out several people in the audience during his part of the presentation, even before they had a chance to speak.  He made the mistake in attempting to suggest that a Del Rio resident, who in the past at a variety of meetings around the County, has been vocal in her attempt to save prime farmland,  had no real basis for her argument since she lived in Del Rio.  Several in the audience immediately stood up and requested Salida MAC Chairman Thomas Reeves to reign in  Mr. Petrulakis and insist he start using civility which he was obviously lacking.  George claimed he was only making a point, although at her expense.  Maybe in this case George should have stayed quiet since she stood up and pointed out he lived in Del Rio too and was attempting to convince others his opinion was the only correct one. 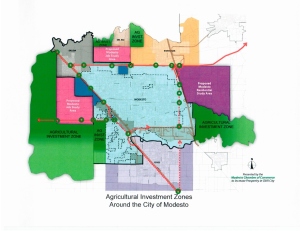 The above is the first time the Chamber suggested all 25,300 acres of their plan for SPRAWL be brought into Modesto’s General Plan. The above picture is courtesy of Duane Spyksma.

It seems that according to Mr.Lewis and Mr. Petrulakis, the only people allowed an opinion are men since they were heard to  verbally abuse both females, an audience member and a member of the Salida MAC for having one.

During the meeting the Modesto Chamber’s CEO and head lobbyist Cecil Russell was overheard by several attendees to say “The problem with these people is they’re stupid, they aren’t smart enough to think outside of their small box.”  We freely admit this phrase was told to us by several people after the meeting.  And though their recollections varied slightly and the prior statement is paraphrased, we believe it is  extremely close to his original statement.

While the presentation was going on it appeared that several people who were first time attendees and lived in the Wood Colony area weren’t believing very much of what they heard.  Like most of us believe, the idea that the Chamber wanted to protect prime farmland by bringing it into Modesto’s General Plan was ludicrous. And when the Chamber reps started getting vicious and personal with the audience several couples  got up and left shaking their heads in disgust.

Very telling was hearing Cecil Russell trying to take the meeting over by attempting to not allow the comment time that Chairman Reeves had already scheduled immediately after the presentation for the listeners.  Now and in the past Cecil has refused to allow the general public to have a copy of his Pathway to Growth/SPRAWL plan and isn’t interested in any forum that allows debate.  He, and the Chamber, apparently intend on ramming it through the Modesto City Council where it’s believed he might already have the votes. The Modesto Council has ignored the public on every recent vote where preserving prime farmland is concerned.

Here is the most recent copy of the plan for greed and SPRAWL we’ve managed to obtain.  The is from the Modesto Planning Commission meeting July 15, 2013.  The Chamber refused to supply the Salida MAC with an electronic copy from their meeting.

The Chamber brought along most of their usual cadre of supporters, Brad Hawn, Dave Romano, Bill Zoslocki and a few others.  We found council candidate for District 4 Bill Zoslocki, a Village I profiteer, prefers to be called a “broker” rather than “developer.” From our view that like a highway man being offended by someone saying  he used a revolver  instead of an automatic during a hold-up, but if that’s what he prefers maybe he won’t jump up and melt down when his name hasn’t been used.  It seems like the Chamber’s buddies enjoy when members of the public are called out by name but take offense even when theirs isn’t used.  I have to think he recognized himself.

What the remaining listeners heard was the Chamber’s plan will bring 39 square miles into Modesto’s General Plan when Modesto proper is only 37 square miles. And the Chamber wonders why their plan is being called the Pathway to SPRAWL by those who see it for what it is. The largest bait and switch land grab in Modesto’s history.   After all, who could believe the Chamber was going to “protect” the farm study areas by bringing them into the General Plan?  From all of those I talked with there weren’t any believers that night.

And shame on the arrogance and lack of professionalism of the Modesto Chamber of Commerce for publicly going after these women by name.     Besides boys, these ladies will kick your butt at the ballot box!

A Salida Resident Talks about the Recent Salida MAC Meeting

I attended Tuesday nights Salida M.A.C. meeting and listened to the delivery and performance of Modesto Chamber’s
plan for expansion that will bring Jobs, Jobs, Jobs.  George does a pretty good job getting his point across. I did notice that a few items were left out of the delivery.  Namely that part about the property on Kiernan Road. I don’t know if that was intentional or not, but George does not make many mistakes.

THE LAND SOUTH OF KIERNAN ROAD FROM KAISER HOSPITAL WESTWARD TO STODDARD ROAD BELONGS TO SALIDA!
THE LAND NORTH OF KIERNAN FROM DALE ROAD WESTWARD TO SISK BELONGS TO SALIDA!
There were a few disparaging comments made during the meeting as well that will probably hurt the Modesto Chambers cause.
Cecil Russell was overheard saying that “the people of Salida are too stupid to see out of their own box”.  Hey, we don’t want to see anything but ALL OF SALIDA BEING INCORPORATED! You don’t see us stepping on Modesto’s toes as they can do whatever they want…..with Modesto!
Craig Lewis said he doesn’t think Amanda Sorenson dresses well for a meeting. Hmm, does she need wear clothes according to Craig’s dress code. WHAT? He also says that Katherine Borges is OPINIONATED!! OMG! Really? Thank God she has opinions and thank God we have a dedicated group of Salidan’s who care about the future of this town to donate their time and talents to make this a better town as well as contribute to incorporation. Yes, Katherine is opinionated…..and, I confess, so am I. Its beyond me to allow outside organizations, without expressing myself, to take over our town or chip away at our land as they did with Kaiser Hospital, Costco, Lowes and Save Mart.
We’ve said it before “STAY OUT OF OUR TOWN…EVERY SQUARE FOOT OF IT”! Take ALL of Salida OUT OF MODESTO’S PLAN AND SPHERE OF INFLUENCE!
By Jim Bonetti
Posted in Uncategorized and tagged Craig Lewis, Lobbyist Cecil Russell, Modesto Chamber of Commerce, Modesto politics, Pathway to SPRAWL, Salida Annexation, Salida Chamber of Commerce, Salida MAC | Leave a comment