Archive for the tag “Ted Brandvold”

Modesto’s Cover-up To Start By Firing the Auditor

We’ve learned Modesto’s auditor apprised members of the Modesto City Council’s Audit Committee in a memo on July 19th of her concerns that the City Attorney and the company Meyers Nave had overstepped their bounds by misrepresenting themselves in SR 132 eminent domain legal services.  The memo was sent to Mayor Ted Brandvold and Councilmen Mani Grewal and Douglas Ridenour.

That’s when the scheme was created to implement a cover-up of the alleged malfeasance by Meyers Nave, the company Modesto has contracted for legal services, which supplies Adam Lindgren as Modesto’s City Attorney.  Less than two months after Modesto hired Monica Houston as the City’s Auditor and just weeks after the memo was sent to the City staff;  City Manager Joe Lopez and Attorney Adam Lindgren implemented a series of job performance evaluations in secret (closed sessions) supported by Council members Bill Zoslocki, Doug Ridenour, Mani Grewal, and Jenny Kenoyer  The City Attorney demanded they go into closed sessions for the evaluations.    For those unaware Council members can’t reveal to the public what is said during closed sessions.  It’s our understanding that four and possibly more closed sessions were scheduled.  But obviously and according to their plan, we don’t know what transpired but we doubt it was hugs and smiles.  Probably just the opposite (acrimonious with hostile overtones) since they are trying to silence Monica.

In an article in the Bee dated Oct 10th by Rosalio Ahumada, the City Council meeting was detailed quite well except at the time he and the rest of us weren’t aware of the memo behind some of Ted Brandvold’s and Kristi Ah You’s comments.  During the Council meeting, about 1 hour and 19 minutes, Mayor Brandvold suggested documents were being falsified  by city staff.  If the documents that the Auditor has don’t match the documents the city now has or any falsification is present then heads should roll starting with the City Attorney and City manager for suborning the falsification or alteration of city documents.  If you listen to the council meeting when Mani comes back in you hear lots of static. We’ve been told before the interference is caused by someone’s phone being on.  Mani was the only one that left the dais.  You have to wonder who he felt the need to call for instructions. But there’s more…

In the memo Houston includes actions by Meyer Nave of supplier favoritism including no bid contracts. Also included are suggestions of fraud, waste and abuse in the assigning of contracts.  These charges could expose Modesto to financial loss. 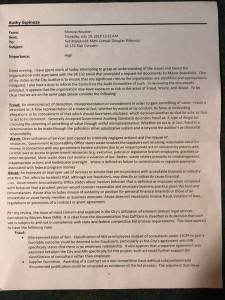 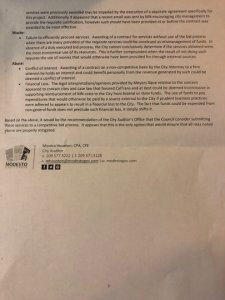 There have long been questions about the large sums of money Modesto is spending for legal fees.  We are aware lawyers are expensive but having a real City Attorney is cost effective compared to outside council/firm is extremely expensive. We and others have submitted Public Record Requests truing to find out just how much Modesto pays in legal fees but to this point the items provided by the city are so redacted it makes them almost useless.  They black out so much information it’s almost impossible to tell what services the invoices are paying for.  Also coming into question is the assigning of legal contracts.  Is Meyers Nave receiving quid pro quo for their assigning lucrative contracts for city business?  What are they hiding?

All things considered it would seem we have a Sacramento legal firm adding to their bottom line using questionable legal means at our expense and they, with the help of the inept City Manager and a few members of the City Council,  are willing to orchestrate a the firing of anyone who stands in their way.  Why is it when someone steps forward to warn the City Council of problems they get shown the door?  When will Modesto start working for ALL of the people who live here and not just special interest groups that quite often don’t ?

More food for thought:  Meyers Nave is council for four other cities in Stanislaus County which would give them a large power block on StanCog and  Stanislaus LAFCO or Local Agency Formation Commission.  Before your eyes glaze over LAFCO has the final say on cities wanting to expand and develop.  In Modesto they enabled a new  area of Beard Industrial to avoid paying Modesto user fees which was against their policy until Modesto special interests intervened.  So we not only provide below cost subsidized  electricity we don’t charge them the extra six percent user tax that you and I pay for electricity, sewer and water. 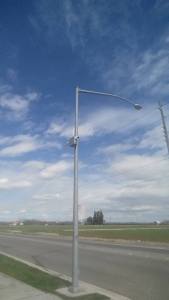 Do you think you have friends in high places?   Maybe you do and maybe you don’t, but  Cecil Russell certainly does.  On Friday December 2, 2016 a Modesto Irrigation District employee,  Ms. Queta, called the City of Modesto to inform them cameras had been placed on three street light poles outside Chateau Provence which just happens to be the gated community where Cecil Russell lives.  Ms. Queta said they had been illegally installed and the power was being stolen.

Just as interesting according to MPD Chief Carroll, these cameras can be viewed in real time by Modesto Police.  So without knowing for certain, we can presume Cecil Russell at least helped to make arrangements for cameras to be installed on city light poles using stolen city power. In one of the emails Chief Carroll said he was working with Cecil and the Association and in good faith he believed they (Cecil and the Association) had worked something out with MID.

And people at the City like Mark Murphy, Traffic Operations Engineer, believed they needed to be removed. When the questioning went further Jeff Barnes asked  if anyone took out an encroachment permit. Dan England responded that the city had NOT issued any permits for cameras on the poles. Jeff Barnes then jumped in and told Chief Carroll “We are not planning on touching them.  However MID might since the cameras ware using MID power without paying. MID would be well within their rights to stop the power theft.”

Chief Carroll came back with a lengthy response: “Just to clarify, I was working with the neighborhood association to have this done.  It would be my bad if there were not permits pulled.  I believed we could give approval for the cameras, and we did have a meeting about it 6-8 months ago.  The issue was MID power the association and Cecil Russell I believe had worked something out with MID.  I have contacted them and they will reach out to MID.  As a side note, those cameras are able to be viewed in the PD real time crime center and I believe we should figure out a protocol in conjunction with MID that would allow public / private partnerships if a neighborhood association is willing to purchase cameras.”

So apparently even if you live in far North Modesto where there are very few homeless and live behing high walls and an iron gate you are ‘special’ and the MPD will provide a real time video security watch on your neighborhood.  This watch will be for free and that includes the light poles to mount the cameras and the power to run them, at least if your name is Cecil Russell and you’re the head lobbyist for the Chamber of Commerce

Transparency, Honesty, Do These Words Apply to Ted Brandvold and Modesto’s City Government? 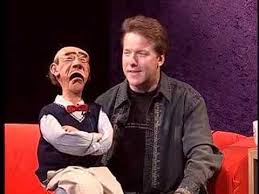 Peeling the onion would be another way to describe what this series of stories is going to attempt to do. Like layers of an onion some will be longer and some shorter but hopefully they will provide insight to what is going on down at 1010 10th st.,  City Hall

At the end of January we heard Modesto Mayor Ted Brandvold express disappointment that  Wood Colony didn’t inform him they were setting up a MAC (Municipal Advisory Council). He made it sound like he was completely blindsided.  Could this have been true?

Possibly, but I sincerely doubt it.  You see I’m sitting here looking at an email from Cynthia Birdsill, City of Modesto-Community & Economic Development, dated September 26,2013 that says “FYI, the County has been meeting with Wood Colony to possibly create a MAC.”  This email was sent to City Manager Jim Holgersson and Brent Sinclair.

Now it’s within the realm of possibility that Ted wasn’t told by all three members of City staff…but…I’m looking at another email that’s from Land use attorney George Petrulakis three hours and thirty four minutes later  and he’s been reading the MAC proposal and is commenting to Cynthia Birdsill, Patrick Kelly, Steve Mitchel, and Brad Wall.

With all of those people  in the loop it would be doubtful that the Mayor would not be told by someone on City Staff.  But it gets better.  For those not following local politics when it comes to the Mayor, you get two for one.  First is George Petrulakis, the Ventriloquist and Ted Brandvold is the puppet on his lap.  George’s hands up Ted’s backside move and Ted’s mouth opens and closes.  George knowing about the MAC proposal makes it a foregone conclusion that Ted knows all about it.

So why was our Mayor being so disingenuous?   It’s all about public perception. Ted plays the affable elderly gent quite well.  And George wants to lull Wood Colony with a false sense of security.

And don’t worry there’s much more to come. 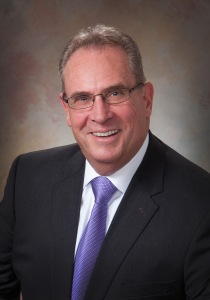 Modesto’s history of keeping track of public funds is atrocious. Consider our track history of NSP2 or Neighborhood Stabilization and Preservation funds. Ryan Swehla created Trinity Ventures and received the lions share of the millions of dollars in grant money. Then former City Councilman Joe Muratore, Swehla’s real estate business partner, had to return $68,000 or be charged with a felony by the feds for his participation.

Then there was SCAP and Joe Gibbs who took public money for rebuilding homes and was supposed to be renting them out to low income families. But instead placed their friends and relatives in them.

The city was supposed to be overseeing these funds but instead they went to political insiders. Can we trust our politicians with our money without watching them closely? Heck NO!

To borrow a line from Frank and Ernest, Our problem is we have too many teachable moments and not enough learnable ones.

Our Options For Mayor Are Limited But Our Choice Is Clear 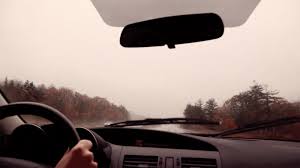 If you don’t mind lets take a short road trip. Lets get in the car at the Double Tree hotel on 9th St. in Modesto and go west on Maze Blvd also known as 132. We’re going to pass Carpenter Rd and Dakota Rd. Still heading west we pass Hart Rd and Gates Rd, past the old Yandell Ranch Airport. We’re even going to pass the large Mapes Ranch sign and go all the way to the river. Our journey was about 13 miles and took us around 23 minutes just to get here. Now lets turn right on the river and take it all the way to just past Salida to the north.

So from 99 to past Mapes Ranch, to the San Joaquin river on the west, from here all the way past Salida to the North. That’s a lot of homes and farms and ranches for the Chamber to pave over.

The boundaries and votes I mentioned are all part of public record during Ted’s time on the Modesto Planning Commission. The plan was presented by Craig Lewis, Cecil Russell and “Broker Bill” Zoslocki all members of the Chamber, Craig Lewis is a realtor and Bill Zoslocki is a real estate broker while Cecil Russell is a lobbyist. All of these men support Ted for Mayor.  We need to hold Ted Brandvold responsible for his votes while on the Planning Commission.

Now you see why we need to vote for Garrad Marsh for Mayor of Modesto. 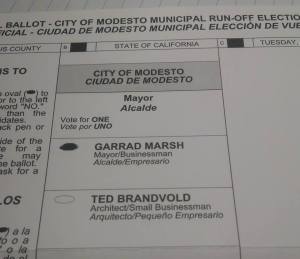